Cinco de Mayo has become more popular as a celebratory holiday throughout the United States in recent years. Though its historical roots are in Mexico and the Battle of Puebla, experts are quick to point out that it is more widely celebrated in the United States than in its home country. Like St. Patrick's Day to Irish-Americans, Cinco de Mayo has largely come to represent the plight of Mexican-Americans and has become an excuse to party. Cinco de Mayo marketing and sales have risen alongside Cinco de Mayo's stateside rise in popularity. As a graphic designer, this means you might be put to task to develop postcards, posters, banners or flyers with a Cinco de Mayo theme. To help you get the job done quick and easy, here are some of the best Cinco de Mayo graphic design resources on the web.

Chili peppers, cacti and maracas - what could be more Mexican? You can get all three in one cartoon-like vector from ]]>ForDesigner]]>. Or, adorn your Cinco de Mayo postcards and posters with the Aztec's legendary eagle and serpent coat of arms from VectorStuff. ArizonaKate has a great tutorial on how to make festive ]]>Cinco de Mayo fonts]]>; a similar tutorial resides on About's ]]>servers]]>. You'll find a festive sombrero icon from ]]>VeryIcon]]>, while FreshFreeStuff has a Mexican flag vector for ]]>free download]]>. 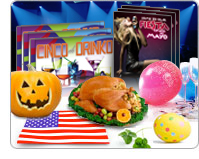 As a graphic designer you're more likely to want to draw your own Cinco de Mayo illustrations, so your starting point is to understand the holiday's history and traditions. Research Cinco de Mayo to learn more and to identify obscure tidbits you can use as graphic design inspiration. Start with the Cinco de Mayo ]]>Wikipedia]]> page to learn more about the background of the holiday and certain customs and traditions, then browse over to the ]]>Battle of Puebla]]> Wikipedia page to discover the historical incident that serves as the foundation for Cinco de Mayo. ]]>The History Channel]]> likewise has an interesting page about Cinco de Mayo. Believe it or not, one great way to find graphic design inspiration for your Cinco de Mayo postcards and posters is by browsing arts and crafts on websites such as ]]>Kaboose]]> and ]]>Family Fun]]>. The writers and editors at these online magazines have already done a lot of legwork to design artwork that carries the Cinco de Mayo theme, so you'll find creative ways to represent sombreros, mariachi guitars, piñatas and chili peppers. Another unlikely, though infinitely valuable, source of Cinco de Mayo graphic design inspiration is recipes. Traditional Cinco de Mayo foods are rich in colors, textures and shapes - just like your graphic designs! From appetizer through to main course and desserts, check out websites such as ]]>Kraft Foods]]>, ]]>All Recipes]]> and ]]>The Food Network]]> to identify unique yet easily recognizable ways to represent Cinco de Mayo for your flyers, banners, postcards and door hangers.