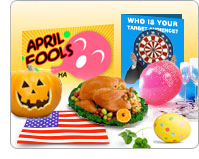 There's no zanier holiday for marketing than April Fools' Day. It's the one day when you can play a fool and get away with it. Many companies pull crazy publicity stunts on April Fools' Day, from Google to BMW, and there's no reason you can't get in the mix and boost your brand recognition while earning some free press to go with it Here are some ideas for off-the-wall April Fools' Day marketing strategies you can deploy this year:

The pranks, scandals and outright hoaxes from April Fools' Day past are legendary. Perhaps you remember Google offering Internet service via toilet plumbing, BMW promising to sell cars with mini-wipers for the hood ornaments, or the BBC running a 1957 documentary on spaghetti farming. If you run a quick online search for famous April Fools' Day pranks and hoaxes, you'll literally come across hundreds perpetrated by companies, radio stations, magazines, newspapers, students and the public at-large. Conduct some research to get inspiration for your big April Fools' Day hoax. It could be as simple as press release or as oversized as a 100-foot banner draped over your storefront or on an overpass. Or, you could send postcards and distribute posters and flyers. Your hoax could be an over-the-top announcement or a hijinx filled event. Whatever it is, make sure you're large and in charge ... a weak breeze barely gets noticed, but an enormous gust makes a lasting impression. Take the competition by storm!

Consult Guinness World Records to see what world records you might be able to vie for on April Fools' Day. You could make a serious attempt at breaking a record, or you could make your world record-breaking attempt part of your prank. Perhaps you could make up a ridiculous world record, whether recognized by Guinness or not, such as most people inside your place of business at one time (which could be three depending on your business) or most people tearing the "legs" off of rubber frog balls at once (which could potentially be one, since it's likely never been officially recorded). A bit of tongue-in-cheek is expected on April Fools' Day!

Simply finding a humorous slant to exploit on April Fools' Day is often enough to generate buzz via word of mouth. One company made a large banner that blended in with its surroundings, save for a fake cop car depicted at the side of the road. And how about Burger King's "left-handed" Whopper? The sandwich joke was incredibly popular, especially once people began requesting left- or right-handed Whoppers through the restaurant chain's drive-thu windows! Now, do your own research and read this Museum of Hoaxes article on the ]]>Top 100 April Fools' Hoaxes of All Time]]>. Before you know it, you'll have a list of ideas you could turn into great publicity-generating pranks this year. Find something relevant to your business and your customers that's also newsworthy, and plan to pull it off right. If you manage to come up with a tasteful-yet-outrageous idea, the buzz will turn into sales.