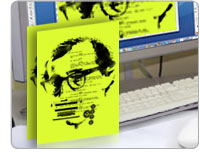 A picture says a thousands words, and then some. Take a look at this suite of ]]>Greenpeace posters]]>. The first appears to depict a grasshopper, but upon closer inspection you can see that the grasshopper shape is actually comprised of pea pods. Look a bit closer and you'll notice that this poster is part of Greenpeace's campaign to encourage you to avoid genetically modified plants, which can contain the genes of insects, animals and viruses. Each poster has very little text, but the images depicted say enough. They are highly effective and have won social ad awards. And this is why you should print image-centric posters for poignancy. Nonprofit ad groups are incredibly skilled at creating poignant, image-centric posters, and you can emulate the same design concepts in your projects to achieve similar accolades. Let's break down what makes these Greenpeace posters so great, and how you can print posters just like them.

You've heard it before, and it holds true here: white space is your friend. The Greenpeace posters use a spotlight effect to draw your attention to a sole graphic image. This is where your eyes naturally go when you view these posters, and you can just tell that something is off, which is what compels you to take a closer look. You automatically ask yourself what the meaning of this image is, so you go to the text box to learn more.

Greenpeace could have gone with a large, bright headline that said "Do you know what you eat?" Instead, they went for a practically-obscured box in the corner. The reason is to command your full attention. A large headline, though immediately understood, would have distracted from the poignancy of the image. You have to be drawn in for a closer look to truly understand the message touted by the poster, and therefore the subdued text is a stroke of genius. It engages you, and you leave the poster wary of peas - at least, any pea that has been genetically altered.

Brand your company (or nonprofit)

The largest text on the poster is the Greenpeace logo, which is by design. The organization wants you to know who is behind this message, and since all the text is contained in a relatively small box your brain registers the logo the entire time you're reading. The logo compels you to trust Greenpeace, to want to learn more and to potentially join the organization or donate money to fund its cause. Next to the logo is the GMO sign, which is what you're supposed to look for on food packages so you can rest assured that your food does not contain any trace of scorpion, grasshopper, mosquito or virus. After reading this article, there is a good chance you'll actually do that the next time you hit the grocery store.

You can't tell from the images, but it's almost a certainty that these posters are printed on recycled paper. It only makes sense for an organization that works to protect the environment. Printing posters on recycled paper reinforces Greenpeace's credibility.