The History of the Printing Press

The Invention of the Printing Press

Most of us tend to take printed materials for granted, but imagine life today if the printing press had never been invented. We would not have books, magazines or newspapers. Posters, flyers, pamphlets and mailers would not exist. The printing press allows us to share large amounts of information quickly and in huge numbers.

In fact, the printing press is so significant that it has come to be known as one of the most important inventions of our time. It drastically changed the way society evolved. In this article, we will explore how the printing press was invented, as well as how it affected culture.

Life before the printing press

Before the printing press was invented, any writings and drawings had to be completed painstakingly by hand. Several ]]> different materials ]]> were used to transcribe books: clay and papyrus, wax, and parchment. It wasn’t just anyone who was allowed to do this; such work was usually reserved for scribes who lived and worked in monasteries.

The monasteries had a special room called a "scriptorium." There, the scribe would work in silence, first measuring and outlining the page layouts and then carefully copying the text from another book. Later, the illuminator would take over to add designs and embellishments to the pages.

In the Dark Ages and Middle Ages, books were usually only owned by monasteries, educational institutions or extremely rich people. Most books were religious in nature. In some cases, a family might be lucky enough to own a book, in which case it would be a copy of the Bible. 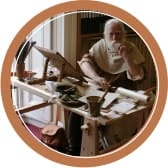 Inspiration and invention of the printing press

Around the late 1430s, a German man named Johann Gutenberg was quite desperate to find a way to make money. At the time, there was a trend in attaching small mirrors to one’s hat or clothes in order to soak up healing powers when visiting holy places or icons. The mirrors themselves were not significant, but Gutenberg quietly noted how lucrative it was to create mass amounts of a cheap product.

During the 1300s to 1400s, people had developed a very basic form of printing. It involved letters or images cut on blocks of wood. The block would be dipped in ink and then stamped onto paper.

Gutenberg already had previous experience working at a mint, and he realized that if he could use cut blocks within a machine, he could make the printing process a lot faster. Even better, he would be able to reproduce texts in great numbers.

Instead of using wood blocks, Gutenberg used metal instead. This became known as a "movable type machine," since the metal block letters could be moved around to create new words and sentences.

With this machine, Gutenberg made the very first printed book, which was naturally a reproduction of the Bible. Today the Gutenberg Bible is an incredibly valuable, treasured item for its historical legacy.

How the printing press works

With the original printing press, a frame is used to set groups of type blocks. Together, these blocks make words and sentences; however, they are all in reverse. The blocks are all inked and then a sheet of paper is laid on the blocks. All of this passes through a roller to ensure that the ink is transferred to the paper. Finally, the paper is lifted, and the reader can see the inked letters that now appear normally as a result of the reversed blocks.

These printing presses were operated by hand. Later, towards the 19th century, other inventors created steam-powered printing presses that did not require a hand operator. In comparison, today’s printing presses are electronic and automated, and can print much faster than ever before!

Today, there are multiple types of printing presses, each best for a specific type of printing. They include:

Similar in concept to Gutenberg’s press, letterpresses require an operator to set movable type, ink it, and press paper against it. The entire process is done by hand. The letterpress is often used by small, boutique printers, and offers a beautiful handmade look. However, it’s also inefficient and expensive compared to other printing presses.

The offset press revolutionized the printing industry, making it possible to print enormous quantities efficiently and cost-effectively. In a nutshell, modern offset printing involves using a computer to create a plate, which is then placed on a cylinder. Ink is applied to the plate cylinder, which rolls against a rubber cylinder, which in turn rolls the ink onto sheets of paper fed through the press. Offset presses are used to mass produce newspapers, magazines, books, and other printed materials.

One of the few drawbacks to offset printing is that it’s not economical in low volumes, primarily because plates can cost several hundred dollars to produce. That’s insignificant when printing hundreds or thousands of the same item, but it can be costly when printing a few dozen or even a single copy. Digital presses make low-volume printing affordable, and have similarly revolutionized the printing industry, because they do not require plates. Instead, they use advanced inkjet or laser jet technology to transfer ink to paper.

Though these are the most popular types of printing presses, other types exist for specialized purposes. For example, engravers are often used to create the raised logos often seen on letterhead.

Impact of the printing press

Gutenberg’s invention made a dramatic impact when it reached the public. At first, the noble classes looked down on it. To them, hand-inked books were a sign of luxury and grandeur, and it was no match for the cheaper, mass-produced books.

Thus, press-printed materials were at first more popular with the lower classes. When word spread about the printing press, other print shops opened and soon it developed into an entirely new trade. Printed texts became a new way to spread information to vast audiences quickly and cheaply. Academics benefited from this dissemination of scholarly ideas and even politicians found that they could garner the public’s interest through printed pamphlets.

An important side effect was that people could read and increase their knowledge more easily now, whereas in the past it was common for people to be quite uneducated. This increased the discussion and development of new ideas.

Another significant effect was that the printing press was largely responsible for Latin’s decline as other regional languages became the norm in locally printed materials. The printing press also helped standardize language, grammar, and spelling.

The printing press played a major role in shaping the Renaissance, which has ]]> interesting correlations ]]> to today’s Information Age.

Modern print technology has made printing more affordable and accessible than ever, whether you’re printing thousands of booklets or a single short run poster. The industry has even embraced the Digital Age, which has given rise to online printing companies that make it easy for anyone to design, print, and mail printed materials without leaving their computers.